After a whirlwind romance and wedding, Helen Eberhart Daley, an army nurse, and Lieutenant Frank Daley, M.D. are sent to the front lines of Europe with only letters to connect them for months at a time.

Surrounded by danger and desperately wounded patients, they soon find that only the war seems real—and their marriage more and more like a distant dream. If they make it through the war, will their marriage survive?

Based on the incredible true love story, With Love, Wherever You Are is an adult novel from beloved children’s author Dandi Daley Mackall. 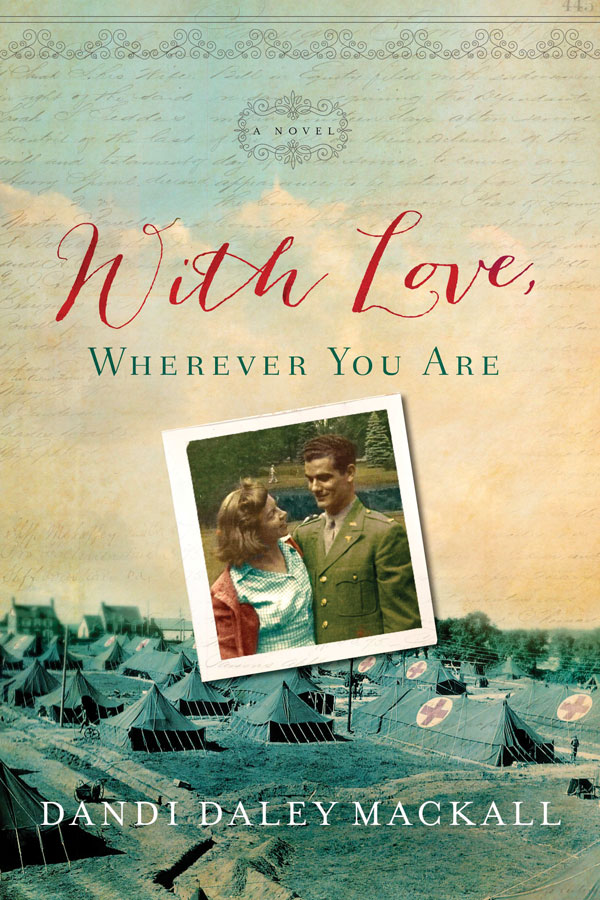 After a whirlwind romance and wedding, Helen Eberhart Daley, an army nurse, and Lieutenant Frank Daley, M.D. are sent to the front lines of Europe with only letters to connect them for months at a time.

Surrounded by danger and desperately wounded patients, they soon find that only the war seems real—and their marriage more and more like a distant dream. If they make it through the war, will their marriage survive?

Based on the incredible true love story, With Love, Wherever You Are is an adult novel from beloved children’s author Dandi Daley Mackall.

Purchase from your favorite bookseller:

The story behind the story

Dandi Daley Mackall is the award-winning author of nearly 500 books for children and adults. She visits countless schools and presents keynote addresses at conferences across the United States. She is also a frequent guest on radio talk shows and has made dozens of appearances on TV. Her awards include the Edgar Award, ALA Best Book, NY Public Library Top Pick, the Geoffrey Bocca Memorial Award, Dean Arts and Achievement Award, Outstanding Alumna Award from the University of Missouri; she is the 2016 Hall of Fame recipient of the Council of International Reading Association’s Award. Her novel My Boyfriends Dogs is now a Hallmark Movie. Dandi writes from rural Ohio, where she lives with her family. Visit her at www.dandibooks.com and Facebook.

A peek into the past

Mackall (My Boyfriends’ Dogs) provides a fictionalized account of her parents’ World War II marriage in this well-researched page-turner... she has crafted memorable, complex characters who courageously face the tragedy of war and the difficulties of cultivating a bond while separated. While the real people behind the characters pack additional punch, Mackall’s heartbreaking narrative and precise prose alone will stay with readers long after the final page.
Publisher's Weekly, Starred Review
Mackall’s tale of love in the European theater during WWII makes readers feel as though they’re there with Helen and Frank. . . No detail is too small, and no emotion is untapped. . . The no-holds-barred depictions of war, in-depth characterizations, and suspense make Mackall’s historical novel an excellent choice for libraries of all types.
Booklist, Starred Review
Fans of "greatest generation" memoirs, resilient love stories, and gritty medical dramas will all find something to love in Mackall's latest. Based on her own parents' heartfelt World War II correspondence, her narrative springs off the page, painting a vivid portrait of the courage of an entire nation-- not only the soldiers sent to the frontlines, but those who played equally critical and heroic supporting roles in wartorn hospital wards and at home. A powerful tribute!
Christian Book Distributor
This one kept me up nights, was snuck out between meetings and at stoplights. The frailties and power of raw emotion, through families and war, triumph and tragedy, raise the learning curve with action, and unforgettable people. This read is the cumulative best of everything Dandi has. Promise yourself not to skip one page to peek ahead or you’ll miss something crucial. It’s that tight and fast moving! In the end…you’ll be wiser and calmer and more excited about life. And then you’ll want to read it again!
Phyllis Wallace, former host of Woman to Woman
Uplifting and endearing, With Love, Wherever You Are tells the real-life story of the romance between an Army doctor and nurse in World War II. With spunk and humor, Frank and Helen navigate the hardships, loss, and dangers of war. Dandi Daley Mackall paints a sweet but accurate picture, and I was hooked. Thoroughly engaging!
Sarah Sundin, award-winning author of When Tides Turn
Dandi Daley Mackall has written a masterpiece of true love forged in the harsh furnace of separation, terror, and deep longing as two amazing World War II heroes serve their country. The very real letters, written in the heat of battle, add richness and depth to this story, putting clarity to a living romance.
Hannah Alexander, author of The Hallowed Halls Series
Dandi Mackall's With Love, Wherever You Are is a wonderful, sometimes heartbreaking look at what it was like for young lovers, newlyweds, separated by a world at war with only their letters to keep them connected. Touching, romantic and oh, so real.
Julianna Deering, author of the Drew Farthering Mysteries
Dandi Daley Mackall’s With Love, Wherever You Are is a stirring and emotional WWII novel. I became invested in the characters, seeing the war through their eyes and circumstances. I smiled often, and more than once, I cried. Already I miss spending time with Frank and Helen and the doctors, nurses, and patients who surrounded them, all of them ordinary people thrown into extraordinary and often painful circumstances. Put this novel on your Must Read list for 2017.
Robin Lee Hatcher, RITA and Christy Award winning author of You’ll Think of Me and Keeper of the Stars
With Love, Wherever You Are, is a beautifully written novel. Based on a true story, Dandi Daley Mackall has created a gripping tale using as a framework the lives of a doctor and a nurse serving in Europe during World War II. The novel weaves historical accuracy with the heart-pounding suspense of a long-distance relationship during the worst of times. Not to be missed!
Ann Shorey, Author

A Sale–WITH LOVE, WHEREVER YOU ARE

SOLDIERS–WITH LOVE, WHEREVER THEY WERE

WITH LOVE, WHEREVER YOU ARE (Signed: Frankie or “Tiny”/Helen)

WITH LOVE, WHEREVER YOU ARE

A Sale: WITH LOVE, WHEREVER YOU ARE

WITH LOVE, ON VALENTINE’S DAY

WITH LOVE, IN FRANK’S UNIT